Three goals and three points as Chelsea’s dominant performance sees off Huddersfield away from home in our first game of the new Premier League season.

Maurizio Sarri is doing a fantastic job with his new club as things stand. Winning his first league game in charge of a new club is never easy, and a comfortable victory like this will only thrive the team more onward.

Alongside the manager, Chelsea also introduced two new players to the English top-flight today, as Kepa Arrizabalaga and Jorginho made their league debuts for the club. Kepa had a rather easy game between the sticks, recording himself an important clean-sheet, while Jorginho dominated the middle of the park – adding a goal to his name from the penalty spot.

Chelsea began the game very confidentally, and were able to score twice before half-time. N’Golo Kante – of all people – sliced home a lovely volley from an inch-perfect Willian cross at the 34th minute. Arriving as a World Cup winner, Kante is taking on a new role under Sarri this season, trying to help the team more in attack than before. Looking to it now, he seems to be doing a great job!

Unlike under Antonio Conte, Chelsea refused to sit back after scoring the opening goal and added more pressure to the Terriers’ defence. A smart run from Marcos Alonso was well noted by Jorginho, who played the Spaniard through with the help of Ross Barkley on goal before taken down for a penalty kick. Jorginho stepped up to take it, and made no mistake sending the keeper to the wrong way.

Despite a few good Huddersfield chances, Chelsea were 2-0 up at the break and more was coming. 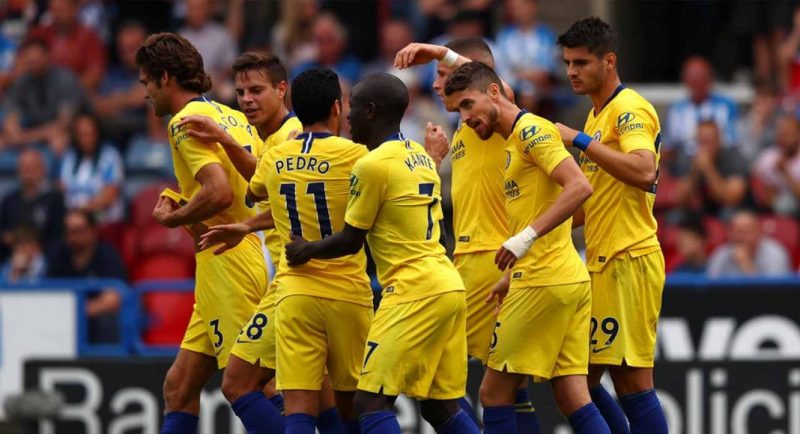 Huddersfield were unable to work themselves any proper momentum of a potential come-back, and Chelsea enjoyed the possession on both halves of the pitch. The so-called ‘Sarriball’ is still a work in progress, but the second half was a lot closer to what we should be seeing in ‘a few months’ time’ – as Sarri himself predicted.

Marcos Alonso hit the bar and Antonio Rudiger went close from a corner, but it was Pedro who sealed the deal for Chelsea on the second half. Eden Hazard, who replaced Willian from the bench, only needed a few minutes to make his mark in the game, as he assisted the former Barcelona man for a great 3-0 goal.

Chelsea are currently on top of the Premier League table and will look to retain their position up-top as they face London rivals Arsenal next weekend at Satmford Bridge. Bring it on, and Come on Chelsea!