A few years ago it was only the true Chelsea nerds who knew about talented academy player Reece James.

Now he’s established as one of the world’s best right backs, and the responses to his Tweet yesterday show it.

While doing a Twitter Q and A, he named Vinicius Jr and Rafael Leao as among the best players he’s faced, and the pair both responded with thanks to his praise. Vini even called him “the best.”

These guys have seen him up close, and they know exactly what they’re dealing with.

You can see the responses in the image embedded here: 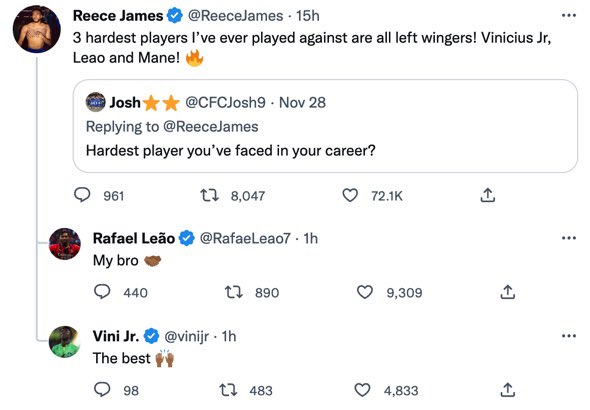 (Video): Chelsea manager on the “challenge” of building a team from a huge dressing room

Chelsea to turn to Premier League striker in the summer

Chelsea set for summer overhaul with 8 potential first teamers out

(Video): “We’ll get there” – Potter on communication problems with new signing