It’s got to the point now where we can safely say that Pedro is leaving Chelsea this summer.

His contract is coming to an end, and despite an impressive campaign under Maurizio Sarri last time out, his level dropped further this year, and it feels like a good moment for the club and the player to move on.

He’s certainly not going to be short of options. Mundo Deportivo report in their paper copy today that there are 5 teams interested in him, and they name all of them.

You can see the little insert from the paper here: 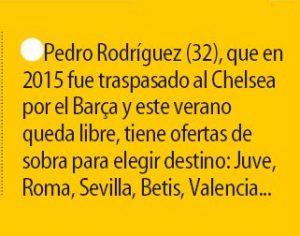 That’s quite a list of suitors. It seems hard to imagine he would get too much game time at Juve, even with Sarri in place there. But the others are all a slight step down, where the winger’s experience and knowledge could add a lot to teams trying to take the next step.

He’s 32 now and probably can’t expect to be a full time starter anyway – but there are plenty of teams in that list where he could be a really significant factor for a couple of seasons at least.